True to the nature of this blog, this is an article about an intermediate software engineering topic. Nothing breathtaking if you’re a senior developer, but hopefully useful to some of the self-taught programmers out there.

Try to catch the bug in the following function:

It’s a stupid bug, but that only makes it more infuriating when you finally catch it. The idea of the function is to prepare a meal by taking an egg, and then all the ingredients in the fridge that go well with it. But, because of the bug, we take all the ingredients that go well with themselves (which is, presumably, everything). So, instead of a delicious egg platter, you get a sad heap of food.

All that because we use the same e variable name for both the egg and for each to the ingredients in the fridge. And we either don’t realize it’s a problem, or we forget.

(Do you want examples that are less silly? Wikipedia delivers --- in Lua, Python, Rust, C++, Java and JavaScript.)

If you think this could never happen to you, consider that: 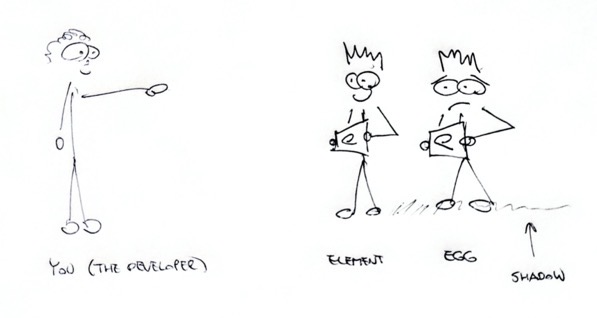 If your language supports it, turn on a linter that warns about shadowing. Shadowing is easy to detect by automated tools like that. You’d think everyone would have that feature enabled.

But in reality, many people don’t. There are at least 2 reasons:

Don’t be either of those people. Yes, configuring a static analysis tool can take time. Yes, when a strict linter is enabled, sometimes it seems like you’re not programming, you’re just appeasing a tool. “Oh, I’m sorry, Mr. Linter, I’m going to fix all the two hundred little nits you just found in my code. I’ll get right on it, sir.” Ugh. Such busywork.

Well, that busywork can help you uncover nasty little bugs before you even write them.

All that said, there are legitimate reasons to shadow identifiers. As always, expect exceptions. Just be on the look out for variable shadowing bugs. They’re widespread and nasty.